Western Australia is Australia’s largest state by area. About three-quarters of the state’s population live in the capital Perth, which is the fourth most populated city in Australia. The east of the state is mostly desert while to the west the state is bound by almost 13000 kilometres of pristine coastline. In the 1890s gold was discovered and mining is still one of the state’s biggest industries.

Western Australia has a number of climatic zones due to its enormous size. In the north-west, heavy rains mark the summer ‘wet’ season, although the interior is mostly dry with high summer temperatures; while the southwest has mild, wet winters and hot, dry summers. Perth’s rainfall is highest between May and September. February is usually the hottest month of the year, averaging temperatures of 31°C. A sea breeze called ‘The Fremantle Doctor’, blows from the south-west providing relief from the heat. Winters are relatively cool and wet with temperatures of around 18°C.

Western Australia is famous for long days of sunshine and diverse landscapes and climates. Cruise down Perth’s Swan River to Fremantle or the Swan Valley vineyards. Or visit wineries fringed by tall forests and crashing surf in the Margaret River. Dive with the huge whale shark on Ningaloo Reef and feed wild bottlenose dolphins at Monkey Mia. Ride a camel down Broome’s Cable Beach at sunset and four wheel drive along the remote, beautiful Dampier Peninusla. Fly over the Bungle Bungle ranges and boat down huge, man-made Lake Argyle in Kununurra. Get gold rush fever in Kalgoorlie or swim from the snow-white beaches of Esperance. 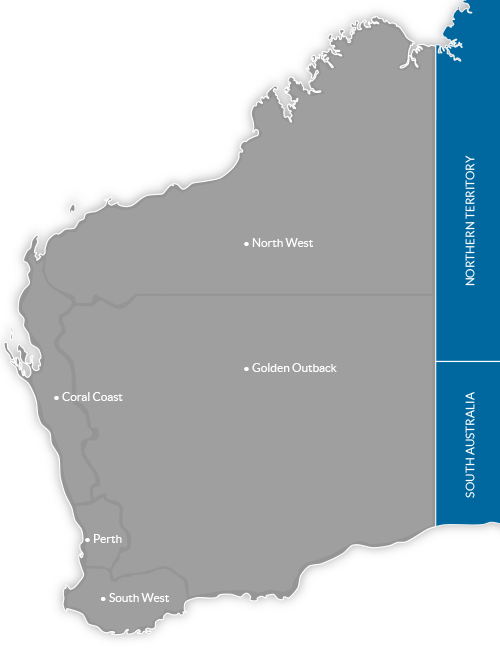