ABOUT THIS REGION The Great Ocean Road is an Australian National Heritage listed 243-kilometre (151 mi) stretch of road along the south-eastern coast of Australia between the Victorian cities of Torquay and Warrnambool. The road was built by returned soldiers between 1919 and 1932, and is the world's largest war memorial; dedicated to casualties of World War I. It is an important tourist attraction in the region, which winds through varying terrain alongside the coast, and provides access to several prominent landmarks; including the nationally significant Twelve Apostles limestone stack formations. The road is considered a tourist attraction in the area, in which much of the road hugs coastline affectionately known as the Surf Coast between Torquay and Cape Otway and the Shipwreck Coast further west of Cape Otway, providing visibility of Bass Strait and the Southern Ocean. The road traverses rainforests, as well as beaches and cliffs composed of limestone and sandstone, which is susceptible to erosion. The road travels via Anglesea, Lorne, Apollo Bay, and Port Campbell, the latter being notable for its natural limestone and sandstone rock formations including Loch Ard Gorge, The Grotto, London Arch and The Twelve Apostles. At the stretch of the Great Ocean Road nearer to Geelong, the road meanders along the coast, with tall, almost-vertical cliffs on the other side of it. Road signs put up along the road warn motorists of possible rockfalls, which have occurred before. INDUSTRY RESOURCES Regional Tourism Website : Visit Great Ocean Road Regional Tourism Website : Visit Geelong and the Ballarine Regional Tourism Website : Visit Victoria Research and Statistics : Tourism Greater Geelong and the Bellarine Local Council : Colac Otway Shire Local Council : Surf Coast Shire Local Council : City of Greater Geelong CREDITS Information Source : Wikipedia Image Credit : Twelve Apostles, Port Campbell National Park : Tourism Victoria : 2009 Paoli Smith Regional Map : Copyright 2014 GoPanda Communications GoPanda 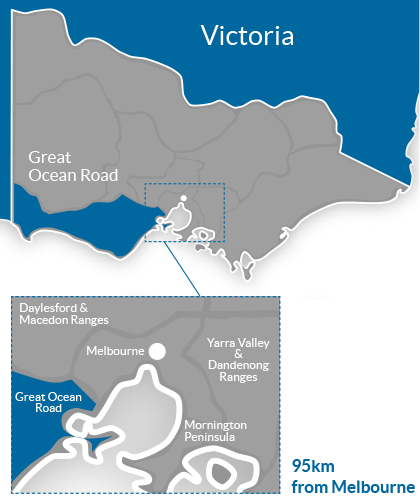 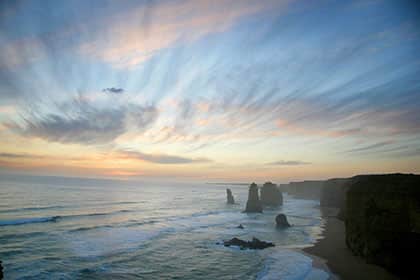