ABOUT THIS REGION The Gold Coast is a coastal city located in the South East of Queensland. The city is 94 km (58 mi) south of Brisbane. It is the second most populous city in the state, the sixth most populous city in the country, and the most populous non-capital city in Australia. The Gold Coast has the largest cross-state metropolitan area population in Australia, due to the inclusion of Tweed Heads in its metropolitan area. While the origin of the city's name is debatable, the name "Gold Coast" was bestowed upon the city by real estate investors. The first settlement in what is now South East Queensland was as a penal colony at Redcliffe. The Gold Coast region remained largely uninhabited by Europeans until 1823 when explorer John Oxley landed at Mermaid Beach. The hinterland's red cedar supply attracted people to the area in the mid-19th century. Later in 1875, Southport was surveyed and established and grew a reputation as a secluded holiday destination for upper class Brisbane residents. The Gold Coast region grew significantly after the establishment of the Surfers Paradise hotel in the late 1920s. The area boomed in the 1980s as a leading tourist destination and in 1994, the Gold Coast City local government area was expanded to encompass the majority of the Gold Coast's metropolitan area, becoming the second most populous local government area in Australia after the City of Brisbane. The Gold Coast is today a major tourist destination with its sunny subtropical climate, surfing beaches, canal and waterway systems, its high-rise dominated skyline, theme parks, nightlife, and rainforest hinterland, making tourism one of its most significant industries. Gold Coast will host the 2018 Commonwealth Games. The Gold Coast experience is fun, excitement and diversity with 70 kilometres of the world’s best beaches, 100,000 hectares of world heritage listed rainforest, and more things to see and do than any other destination in the Southern Hemisphere. Golf courses, award-winning restaurants, theme parks, cascading waterfalls, boutique wineries – all of this and more in Australia’s famous for fun capital! The Gold Coast's Hinterland is just half an hour from the world famous Gold Coast beaches, it is speckled with wineries, local food producers and health retreats. Journey through a patchwork of rural plantations, vineyards, farmland and livestock estates on the way to more than 100,000 hectares of National Parks and reserves, with miles of enchanting bushwalking trails. The Gondwana Rainforests of Australia World Heritage area includes expansive rainforest reserves including Lamington National Park and Springbrook National Park. Travellers of all ages and inclinations will encounter an array of exhilarating worlds brought together in Australia’s theme park capital. Home to more attractions than any other destination in the Southern Hemisphere, the Gold Coast has the fastest, the longest, the highest and the most exciting thrill rides in the country. Unique animal experiences are another feature of the theme parks, including kangaroo feeding and koala cuddles. INDUSTRY RESOURCES Regional Tourism Website : Gold Coast Regional Tourism Website : Queensland Tourism Research and Statistics : Tourism and Events Queensland Local Councils : QLD Councils CREDITS Information Source : Wikipedia Information Source : Queensland Tourism Image Credit : Gold Coast Foreshore : Tourism and Events Queensland Regional Map : Copyright 2014 GoPanda Communications GoPanda 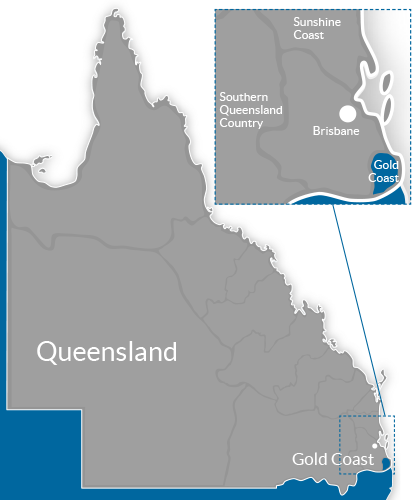 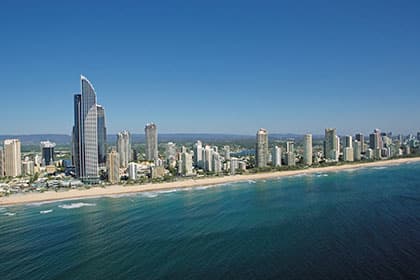