ABOUT THIS REGION The South Coast refers to the narrow coastal belt from Sydney in the north to the border with Victoria in the south in the south-eastern part of the State of New South Wales, Australia. It is bordered to the west by the coastal escarpment of the Southern Tablelands, which is largely covered by a series of national parks, namely Jervis Bay National Park, Eurobodalla National Park, and Ben Boyd National Park. To the east is the coastline of the Pacific Ocean, which is characterised by rolling farmlands, small towns and villages along a rocky coastline, interspersed by numerous beaches and lagoons (known in Australia as lakes, especially in place names). The region has a mild, warm temperate climate. Maximum temperatures range from around 30 °C (86 °F) in summer to approximately 17 °C (62 °F) in winter. However, rainfall tends toward erratic as falls can occur in heavy, but often irregular, storms. If you’re feeling like a breath of fresh air or a short break to recharge your batteries, the beautiful South Coast of NSW beckons with some spectacular scenery and adventure experiences. Crystal-clear bays and lakes, uncrowded beaches and beautiful rivers are perfect year-round for fishing, diving, canoeing and boating while the pristine bushland is enjoyed by bush walkers, bird-lovers and cycling enthusiasts. Enjoy Kiama’s stunning scenery along the 22-km Kiama Coast Walk or head to one of the best dive sites in NSW at Bushrangers Bay Nature Reserve, home to the weedy sea dragon. See sleek fur seals up close, in the wild, at Montague Island off the coast from Narooma. Top it all off with some seriously good food and wine at cafes and restaurants located by a river, overlooking the beach or amidst the vines. The region includes Wollongong, Kiama and Shellharbour, Jervis Bay and the Shoalhaven towns of Nowra, Mollymook and Ulladulla, Batemans Bay and the Eurobodalla towns including Batemans Bay, Moruya and Mogo . The southernmost towns of Bega, Merimbula, Pambula and Tathra are on the Sapphire Coast. INDUSTRY RESOURCES Regional Tourism Website : South Coast Regional Tourism Website : Destination NSW Research and Statistics : Destination NSW Corporate Website Local Councils : Local Government Association NSW CREDITS Information Source : Wikipedia Information Source : Destination NSW Image Credit : Kiama, South Coast : Destination NSW : Murray Vanderveer Regional Map : Copyright 2014 GoPanda Communications GoPanda 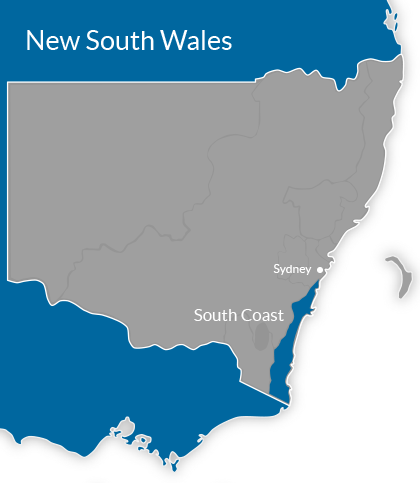 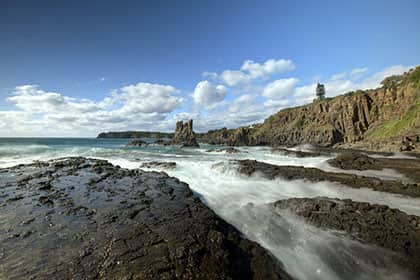