ABOUT THIS REGION Lord Howe Island is an irregularly crescent-shaped volcanic remnant in the Tasman Sea between Australia and New Zealand, 600 kilometres (370 mi) directly east of mainland Port Macquarie, and about 900 kilometres (560 mi) from Norfolk Island. The island is about 10 km long and between 2.0 km and 0.3 km wide with an area of 14.55 km2, "of which only 398 hectares is in the lowland settled area". Along the west coast there is a sandy semi-enclosed sheltered coral reef lagoon. Most of the population lives in the north, while the south is dominated by forested hills rising to the highest point on the island, Mount Gower (875 m or 2,871 ft). The Lord Howe Island Group of islands comprises 28 islands, islets and rocks. Apart from Lord Howe Island itself the most notable of these is the volcanic and uninhabited Ball's Pyramid about 23 km to the south-east. To the north there is the Admiralty Group, a cluster of seven small uninhabited islands. Lord Howe Island is a World Heritage-listed. To relieve pressure on the small island environment only 400 tourists are permitted at any one time. The island is reached by plane from Sydney or Brisbane in less than two hours. The Permanent Park Preserve declared in 1981 has similar management guidelines to a National Park. World Heritage-listed for its outstanding natural beauty, remarkable geology and rare collection of birds, plants and marine life, Lord Howe is surrounded by the world's southernmost coral reef. The pristine waters teeming with marine life and rare coral form Lord Howe Island Marine Park, one of the largest in NSW. There's a whole host of water-based activities on the island including scuba diving, snorkelling, surfing, kayaking and fishing. On land, there's no better way to seek out Lord Howe's 64 unique species of flowering plants, the endangered woodhen and seabird colonies than on well marked walking tracks. if you're feeling adventurous, climb to the summit of Mt Gower, one of the island's towering twin peaks that's considered to be one of the world's best day hikes. From the summit, you'll be captivated by the view - Mt Lidgbird in the foreground and The Lagoon below. On the descent, the jagged-spire of Balls Pyramid rises from the sea. A wide range of accommodation styles, sumptuous spa treatments, beautiful hotels and great dining make Lord Howe Island the perfect getaway. INDUSTRY RESOURCES Regional Tourism Website : Lord Howe Island Regional Tourism Website : Destination NSW Research and Statistics : Destination NSW Corporate Website Local Councils : Local Government Association NSW CREDITS Information Source : Wikipedia Information Source : Destination NSW Image Credit : View from Malabar Hill, Lord Howe Island : Destination NSW : Sally Mayman Regional Map : Copyright 2014 GoPanda Communications GoPanda 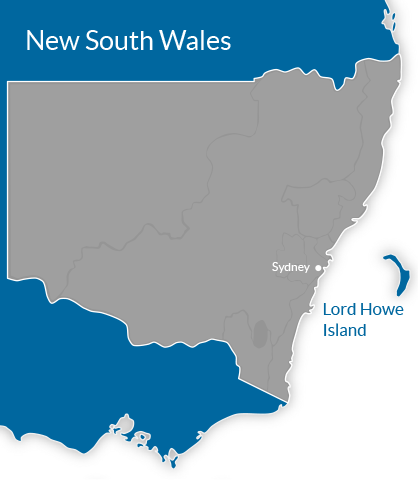 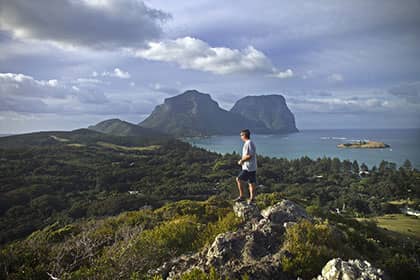