ABOUT THIS REGION The Arnhem Land Region is one of the five regions of the Northern Territory of Australia. It is located in the north-eastern corner of the territory and is around 500 km from the territory capital Darwin. The region has an area of 97,000 km² which also covers the area of Kakadu National Park, and a population of 16,230. Arnhem Land has been occupied by indigenous people for tens of thousands of years. Declared an Aboriginal Reserve in 1931, it remains one of the largest Aboriginal Reserves in Australia and is perhaps best known for its isolation, the art of its people, and the strong continuing traditions of its Indigenous inhabitants. Kakadu National Park is a protected area in the Northern Territory of Australia, 171 km southeast of Darwin. It is a major tourist attraction in Australia’s north. Visitation in 2005 was 202,000. Kakadu’s dramatic landscape, Aboriginal cultural significance and diverse and abundant wildlife are what visitors are drawn to. There are many beautiful waterfalls and gorges within the park that are popular with visitors, such as Maguk, Gunlom Falls, Twin Falls and Jim Jim Falls. Kakadu National Park has some of the best examples of Aboriginal rock art in Australia. The sites of Nourlangie and Ubirr are among the most visited locations in the park. It is possible to view some of Kakadu’s diverse wildlife at places like Yellow Water Billabong, Cooinda on board a wildlife cruise or at Mamukala Wetlands or Anbangbang Billabong. The Kakadu region is one of the world’s best for bird watching as approximately 30 percent of Australia’s bird species can be seen here. Large saltwater crocodiles are also commonplace and visitors are likely to see them at Yellow Water and East Alligator River so it was no coincidence that the Crocodile Dundee films were shot here. Visitors are urged to exercise caution around crocodiles as they have been responsible for a number of fatal attacks. Recreational fishing is a popular activity inside Kakadu National Park. The main target species is Barramundi and the most popular locations are Yellow Water, the South Alligator and the East Alligator River. Hunting is not allowed in Kakadu National Park. There are several accommodation options in the park, mostly found in the town of Jabiru, as well as a range of services to cater to visitor’s needs. Visitors can experience Kakadu National Park with a recognised tour operator or they can drive themselves. Many of the park’s sites are accessible by standard two wheel drive vehicles, but areas like Twin and Jim Jim Falls and Gunlom require four wheel drive vehicles. Visitors can experience Kakadu National Park via the Nature’s Way tourism drive which is a loop from Darwin to Jabiru then onto Katherine and back to Darwin covering approximately 900km. The climate is tropical monsoon with a wet and dry season. Temperatures do not fluctuate widely throughout the year, though it can range from overnight lows of 15 degrees Celsius in the dry season (April to September) to daily highs of 33 degrees Celsius in the wet season (October to March). INDUSTRY RESOURCES Regional Tourism Website : Explore the Northern Territory Regional Tourism Website : Tourism Top End Research and Statistics : Tourism NT Corporate Website Local Council : West Arnhem Regional Council CREDITS Information Source : Wikipedia Image Credit : Kakadu National Park : Tourism NT Regional Map : Copyright 2014 GoPanda Communications GoPanda 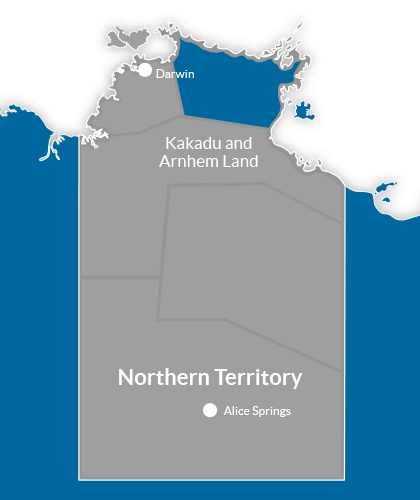 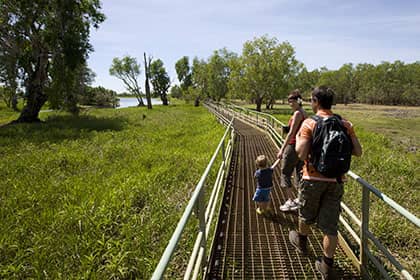