ABOUT THIS REGION The Adelaide Hills are part of the Mount Lofty Ranges, east of Adelaide. It is unofficially centred on the largest town in the area, Mount Barker, which has a population of around 29,000 and is also one of Australia's fastest growing towns. The Adelaide Hills region is one of the cooler wine regions of mainland Australia as, despite warm days in January and February when the grapes are ripening, the region generally experiences cool nights. This significant diurnal variation results in cool mean daily temperatures even in summer and the consequence of this is high quality, cool-climate wines, leading to its world-famous reputation as a wine producing region. Many towns in the Adelaide Hills date back to the early days of European settlement. Norton Summit, founded in 1837, claims to be the region’s oldest. Crafers is the gateway to the Adelaide Hills. It’s also just a short walk from Mount Lofty Summit and some spectacular views of Adelaide. In the mid 1800s, Aldgate and Bridgewater were important stops for horse and bullock teams. Bridgewater’s heart is the magnificent Bridgewater Mill Petaluma Restaurant and waterwheel. Bridgewater Mill was built on the banks of Cock’s Creek, the town’s original name. Hahndorf and Birdwood are iconic towns. Hahndorf has a rich German history, with 90 buildings dating back to the 1800s. Birdwood is home to the National Motor Museum and takes its name from Gallipoli commander, Sir William Birdwood. Lobethal also has a German history but is best known for its spectacular Christmas lights. With more than 250,000 visitors, it’s the biggest Christmas lights display in the southern hemisphere. Oakbank is the place to be at Easter, when the tiny Hills town hosts the Oakbank Easter Racing Carnival. Speaking of horses, take your kids to Gumeracha and climb the world’s largest rocking horse! Stirling and Nairne are just two Adelaide Hills towns with stunning European-style gardens. Leafy Stirling is also a popular destination for visitors to the Santos Tour Down Under bike race. Also in the Adelaide Hills is the Mount Lofty Botanic Garden. There are miles of nature walks and a pretty lake to lounge alongside. In Woodside, it’s all cheese and chocolate. Woodside Cheese Wrights and Melba’s Chocolate Factory are renowned produce makers. One taste and you’ll understand why. Balhannah and Littlehampton reflect their railway days, while in Echunga, it’s gold. Follow the Jupiter Creek Heritage Trail and discover Echunga’s gold rush story. Macclesfield’s stone architecture and a weekly market give the town an old village feel. Meadows, like Oakbank, also springs to life at Easter for its fair but the bakery is worth a visit anytime. The Adelaide Hills’ first grape vines were planted in 1839, three years after European settlers arrived in Adelaide. Six years later, Australia’s first wine export was on its way to England. With more than 60 wineries and acclaimed locally grown food and produce, indulge your appetite in the Adelaide Hills. As one of Australia’s best cool climate wine regions, there’s a cellar door around every corner. INDUSTRY RESOURCES Regional Tourism Website : Adelaide Hills Tourism Regional Tourism Website : South Australia Research and Statistics : South Australian Tourism Commission Local Councils : Local Government Association of SA CREDITS Information Source : Wikipedia Information Source : South Australia Image Credit : Piccadilly Valley : SATC : 2009 Brett Sheridan Regional Map : Copyright 2014 GoPanda Communications GoPanda 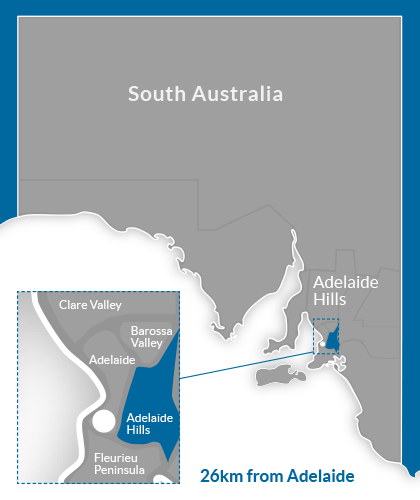 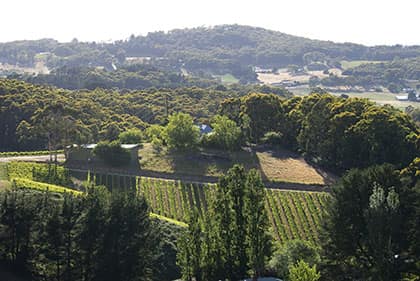