ABOUT THIS REGION Eyre Peninsula is a triangular peninsula in South Australia. It is bounded on the east by Spencer Gulf, the west by the Great Australian Bight, and the north by the Gawler Ranges. It is named after explorer Edward John Eyre who explored parts of the region in 1839-1841. The coastline was first charted by the expeditions of Matthew Flinders in 1801-1802 and French explorer Nicolas Baudin around the same time. The region's economy is primarily agricultural, with growing aquaculture, mining and tourism sectors. The main townships are Port Lincoln in the south, Whyalla and Port Augusta at the north east, and Ceduna at the northwest. The Eyre Peninsula is Australia’s seafood frontier and is renowned as one of the finest fishing areas in Australia. The region boasts plentiful and varied catches from shellfish to finfish, all gathered from the pristine waters. Visitors can take the Seafood Trail along the coastline from Whyalla to Streaky Bay, try some big game fishing and four wheel driving (4WD) or shark cage diving and swimming with sea lions, dolphins or massive bluefin tuna. Experienced surfers flock to the Eyre Peninsula’s deserted surf beaches to ride the big waves and beach breaks. The Eyre Peninsula is the gateway to the Nullabor - the treeless plain that stretches more than 720 kilometres to the West Australian border. Explore caves and an amazing coastline. During the winter months, the coastal waters off Head of Bight are home to migrating southern right whales and their calves. Wild bushland and ancient red landscapes, alongside neat farmland and combed vineyards; the Eyre Peninsula has many different environments. Camp in complete isolation or enjoy top-class accommodation, only minutes from the wilderness. At the far north of the peninsula is the Gawler Ranges National Park and Pinkawillinie Conservation Park where the red landscape and ancient rocks glow in the sunset. INDUSTRY RESOURCES Regional Tourism Website : Explore Eyre Peninsula Regional Tourism Website : South Australia Research and Statistics : South Australian Tourism Commission Local Councils : Local Government Association of SA CREDITS Information Source : Wikipedia Information Source : South Australia Image Credit : Bunda Cliffs, Head of Bight : SATC : 2004 Janine Donato Regional Map : Copyright 2014 GoPanda Communications GoPanda 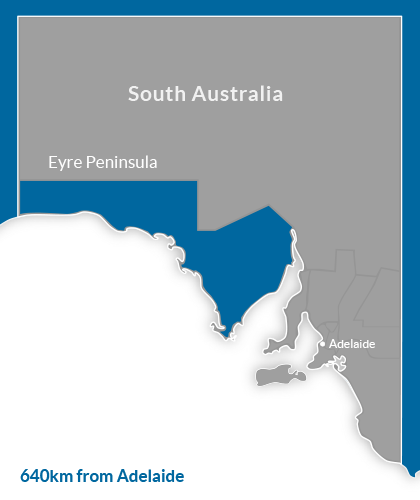 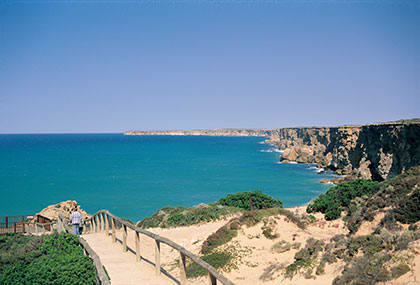