ABOUT THIS REGION Uluru is one of Australia's most recognisable natural landmarks. Uluru, also known as Ayers Rock is a large sandstone rock formation in the southern part of the Northern Territory in central Australia and stands 348 m (1,142 ft) high, rising 863 m (2,831 ft) above sea level, with most of its bulk lying underground, and has a total circumference of 9.4 km (5.8 mi). It lies 335 km (208 mi) south west of the nearest large town, Alice Springs, 450 km (280 mi) by road. Kata Tjuta and Uluru are the two major features of the Uluṟu-Kata Tjuṯa National Park. Uluru is sacred to the Anangu, the Aboriginal people of the area. The area around the formation is home to a plethora of springs, waterholes, rock caves, and ancient paintings. Uluru is listed as a UNESCO World Heritage Site. Kata Tjuta, also called Mount Olga or The Olgas, lies 25 km (16 mi) west of Uluru. Special viewing areas with road access and parking have been constructed to give tourists the best views of both sites at dawn and dusk. Uluru is notable for appearing to change colour at different times of the day and year, most notably glowing red at dawn and sunset. Climbing Uluru is a popular attraction for visitors. The development of tourism infrastructure adjacent to the base of Uluru that began in the 1950s soon produced adverse environmental impacts. It was decided in the early 1970s to remove all accommodation-related tourist facilities and re-establish them outside the park. In 1975, a reservation of 104 square kilometres (40 sq mi) of land beyond the park's northern boundary, 15 kilometres (9 mi) from Uluru, was approved for the development of a tourist facility and an associated airport, to be known as Yulara. The camp ground within the park was closed in 1983 and the motels closed in late 1984, coinciding with the opening of the Yulara resort. In 1992, the majority interest in the Yulara resort held by the Northern Territory Government was sold and the resort was renamed Ayers Rock Resort. Since the park was listed as a World Heritage Site, annual visitor numbers rose to over 400,000 visitors by the year 2000. Increased tourism provides regional and national economic benefits. It also presents an ongoing challenge to balance conservation of cultural values and visitor needs. INDUSTRY RESOURCES Regional Tourism Website : Explore the Northern Territory Regional Tourism Website : Tourism Top End Research and Statistics : Tourism NT Corporate Website Local Council : MacDonnell Regional Council CREDITS Information Source : Wikipedia Image Credit : Uluru, Uluru-Kata Tjuta National Park : Tourism NT Regional Map : Copyright 2014 GoPanda Communications GoPanda 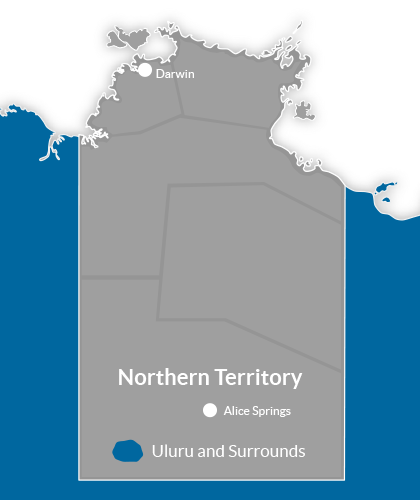 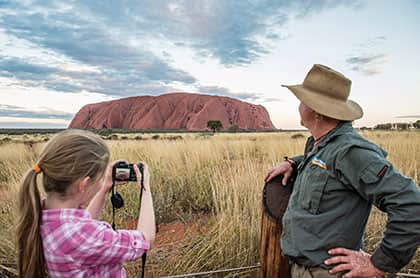