ABOUT THIS REGION The Mornington Peninsula is a peninsula located south-east of Melbourne, Australia. It is surrounded by Port Phillip to the west, Western Port to the east and Bass Strait to the south, and is connected to the mainland in the north. Geographically, the peninsula begins its protrusion from the mainland in the area between Pearcedale and Frankston. The area was originally home to the Mayone-bulluk clan and formed part of the Boonwurrung nation's territory prior to European settlement. Much of the peninsula has been cleared for agriculture and settlements. However, small areas of the native ecology remain in the peninsula's south and west, some of which is protected by the Mornington Peninsula National Park. Around 135,000 people live on the peninsula, most in the small towns on its western shorelines which are sometimes regarded as outlying suburbs of greater Melbourne. During the summer months, the population can swell to around 250,000 people. The peninsula is primarily a local tourist region, with an array of pretty villages and popular natural attractions such as the variety of beaches both sheltered and open-sea and many scenic sights and views. It is also home to a thriving wine region with various wineries, mazes and the diverse array of water sports made available by the diversity of beaches and calm waters of Port Phillip and Western Port. Most visitors to the peninsula are residents of Melbourne who camp, rent villas and share houses or stay in private beach houses. It is known simply as "The Peninsula" to locals and Melburnians alike, giving rise to the expression "going down the peninsula". Seaside villages include Mount Martha, Mt Eliza, Rosebud, Dromana, Mornington, Portsea and Sorrento. Vineyard villages include Red Hill, Red Hill South, Main Ridge and Arthurs Seat. Further afield are the Western Port Bay villages of Tyabb, Hastings, Shoreham, Balnarring, Merricks and Flinders. INDUSTRY RESOURCES Regional Tourism Website : Visit Mornington Peninsula Regional Tourism Website : Visit Victoria Research and Statistics : Mornington Peninsula Tourism Corporate Website Local Council : Mornington Peninsula Shire CREDITS Information Source : Wikipedia Image Credit : Red Hill Estate, Mornington Peninsula : Tourism Victoria : 2007 Peter Dunphy Regional Map : Copyright 2014 GoPanda Communications GoPanda 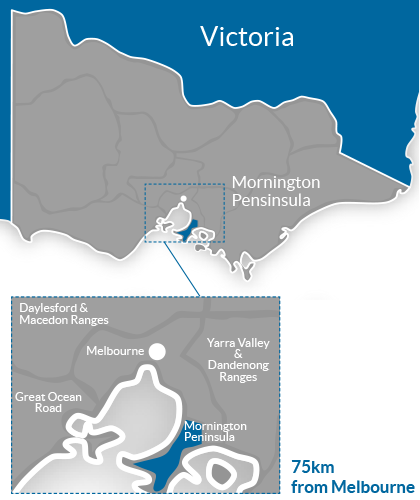 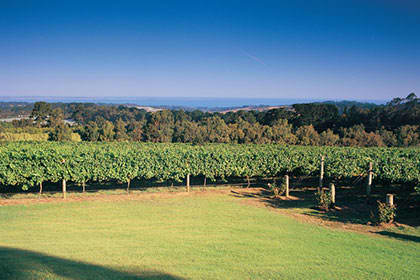