New South Wales is Australia’s oldest and most populated state. It was originally settled as a penal colony on the shores of Port Jackson where the bustling capital city of Sydney now stands. More than a third of Australians live in New South Wales, and Sydney is the nation’s largest city.

New South Wales lies in the temperate zone. The Great Dividing Range, in the east of the state, has a large impact on the climate, creating four distinct zones: the coastal strip, the highlands, the Western Slopes and the flatter country to the west. Sydney’s climate is pleasantly temperate all year round with more than 340 sunny days a year. In summer (December to February), average maximum temperatures in Sydney are around 26°C. It can also be humid at this time with an average humidity of 65 per cent. Average maximum temperatures in the winter (June-August) are around 16°C. Sydney’s rainfall is highest between March and June.

New South Wales has endless unspoilt beaches, breathtaking natural treasures and one of the world’s most famous and vibrant cities. Climb Sydney Harbour Bridge or take the ferry past the Opera House to Manly. Do a day trip to the Hunter Valley vineyards or the romantic Blue Mountains. Restore your zen on the beach in Byron Bay & see dolphins play in the clear waters of Jervis Bay. Bike ride and dive on Lord Howe Island and visit the world’s oldest ceremonial burial site at Mungo National Park. Horse ride, hike or hit the snowfields in the Snowy Mountains or head west for Tamworth’s country music and Moree’s natural artesian spas. 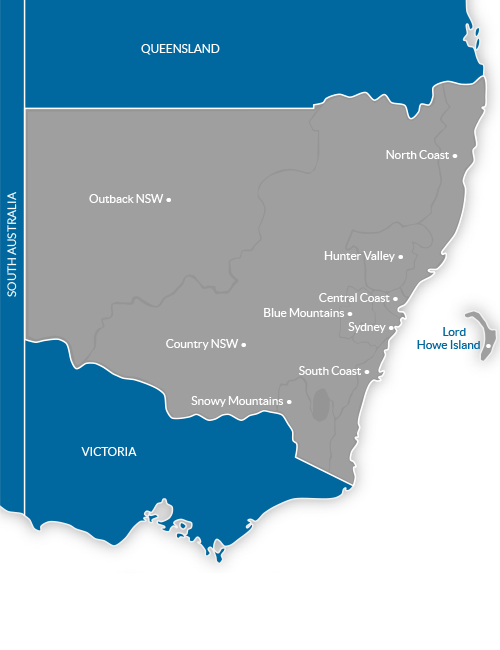