ABOUT THIS REGION The Fleurieu Peninsula is a peninsula located south of Adelaide. It was named after Charles Pierre Claret de Fleurieu, the French explorer and hydrographer, by the French explorer Nicolas Baudin as he mapped the south coast of Australia in 1802. The name came in official use in 1911. Towns of interest in the area include Victor Harbor, Willunga, Mount Compass, Normanville, Goolwa, Yankalilla and Rapid Bay. Districts include Inman Valley and Hindmarsh Valley. There is surfing on both the west and south facing coasts - known locally to Adelaide surfers as the Mid South Coast and the Far South Coast. Surf spots of note include Waitpinga and Middleton on the Far South Coast and Seaford and Moana on the Mid South Coast. A ferry travels between Cape Jervis, at the tip of the peninsula, and Kangaroo Island. The south part of the wine region of McLaren Vale located within the Peninsula. The Fleurieu Peninsula’s green hills are bounded by clifftops, beaches, coves and the winding Murray River. The river pans out and forms a beautiful, calm pool at Goolwa. Sit on the wharf and see boats cruise under the Hindmarsh Bridge. Sail up to the Coorong and see pelicans tilt their heads to the side, watching as you pass their nests. Get close to kangaroos in the conservation parks. Watch little penguins come ashore at Granite Island. With over 100 cellar doors featuring wines from 4 distinct wine regions, combined with cafes & restaurants offering tasty flavours of regional produce & seafood, the Fleurieu Peninsula is a place to indulge. Set amongst charming communities that celebrate with festivals and events, there are a number of galleries, studios and boutique shops that highlight the history and heritage of this region. INDUSTRY RESOURCES Regional Tourism Website : Fleurieu Peninsula Regional Tourism Website : South Australia Research and Statistics : South Australian Tourism Commission Local Councils : Local Government Association of SA CREDITS Information Source : Wikipedia Information Source : South Australia Image Credit : Port Willunga, Fleurieu Peninsula : SATC : 2004 John Montesi Regional Map : Copyright 2014 GoPanda Communications GoPanda 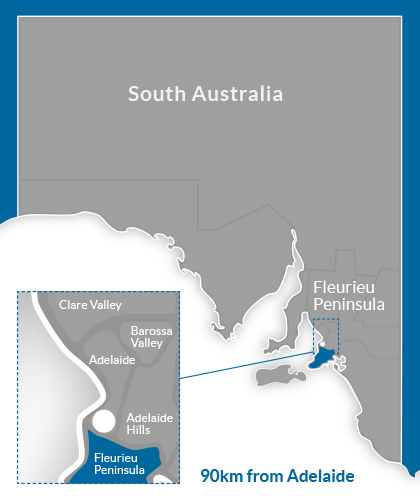 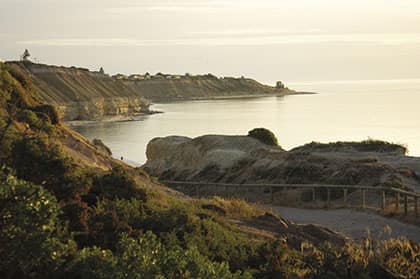