ABOUT THIS REGION Australian Capital Territory (abbreviated ACT) is a territory in the south east of Australia, enclaved within New South Wales. The Australian Capital Territory was created to house the nation’s capital Canberra with a population of 374,245. It is the smallest self-governing internal territory in Australia. The ACT is bounded by the Goulburn-Cooma railway line in the east, the watershed of Naas Creek in the south, the watershed of the Cotter River in the west, and the watershed of the Molonglo River in the north-east. The ACT also has a small strip of territory around the southern end of the Beecroft Peninsula, which is the northern headland of Jervis Bay. The ACT has a mostly dry, continental climate with warm to hot summers and cool winters. The average annual rainfall is 629 millimetres which is fairly evenly distributed throughout the year. The wettest month is October and the driest is June. During winter, snow falls in the nearby Australian Alps. January is the hottest month with average maximum temperatures of 28°C. The coldest month is July with average daily temperatures of 11°C which can drop below zero at night. Canberra has around nine hours a day of sunshine in summer, dropping to around five hours in winter. Apart from the city of Canberra, the Australian Capital Territory also contains agricultural land (sheep, dairy cattle, vineyards and small amounts of crops) and a large area of national park (Namadgi National Park), much of it mountainous and forested. Small townships and communities located within the ACT include Williamsdale, Naas, Uriarra, Tharwa and Hall. Tidbinbilla is a locality to the south-west of Canberra that features the Tidbinbilla Nature Reserve and the Canberra Deep Space Communication Complex, operated by the United States' National Aeronautics and Space Administration (NASA) as part of its Deep Space Network. There are a large range of mountains, rivers and creeks in the Namadgi National Park. These include the Naas and Murrumbidgee Rivers. Canberra As the seat of the government of Australia, Canberra is the site of Parliament House, the High Court and numerous government departments and agencies. It is also the location of many social and cultural institutions of national significance, such as the Australian War Memorial, Australian National University, Australian Institute of Sport, National Gallery, National Museum and the National Library. The Australian Army's officer corps are trained at the Royal Military College, Duntroon and the Australian Defence Force Academy is also located in the capital. The city's design was influenced by the garden city movement and incorporates significant areas of natural vegetation that have earned Canberra the title of the "bush capital". Explore the treasure trove of national attractions, sprawling parklands and fashionable restaurants and bars. Just a 45 minute drive from the city, you’ll find the wildlife, walking trails and Aboriginal rock art of Tidbinbilla Nature Reserve and Namadgi National Park in the northern Australian Alps. Drive the Poacher’s Trail to the wineries, farms and galleries of the surrounding scenic countryside. Hike past wildflowers and glacial lakes in the Snowy Mountains and spot dolphins from pristine beaches on the South Coast. INDUSTRY RESOURCES Regional Tourism Website : Visit Canberra Research and Statistics : Tourism ACT Corporate Website Local Council : ACT Government CREDITS Information Source : Wikipedia Tourism Australia Website : Welcome to Australia Image Credit : Parliamentary Triangle, Lake Burley Griffin, Canberra : Australian Capital Tourism Regional Map : Copyright 2014 GoPanda Communications GoPanda 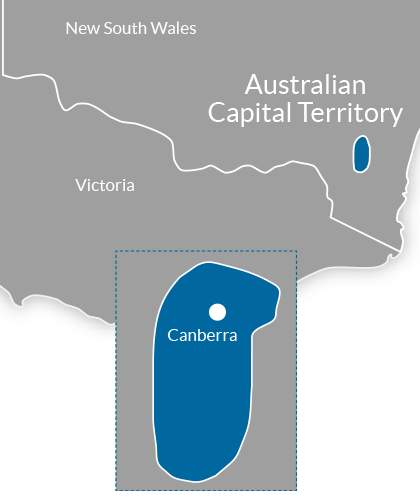 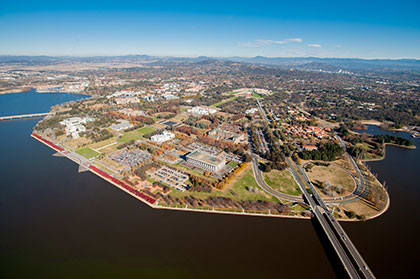