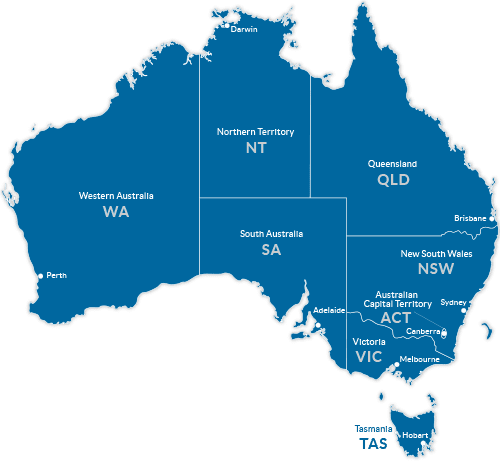 Covering a total area of 7.69 million square kilometres, mainland Australia is the world’s largest island - but smallest continent. Australia experiences temperate weather for most of the year but the climate varies across the country due to its size. The northern states experience warm weather much of the time, with the southern states experiencing cooler winters. Australia is also one of the driest continents on earth with an average annual rainfall of less than 600 millimetres. Australia’s seasons are opposite to those in the northern hemisphere. December to February is summer; March to May is autumn; June to August is winter; and September to November is spring.

Australian society is made up of people from a rich variety of cultural, ethnic, linguistic and religious backgrounds, and this is a defining feature of modern Australian society. Aboriginal and Torres Strait Islander people have inhabited Australia for tens of thousands of years. Most Australians are immigrants or the descendants of immigrants who arrived during the past two hundred years from more than 200 countries. The most commonly spoken language in Australia is English, and the most commonly practiced religion is Christianity, although foreign languages and other religions are also common.

Australia is divided into six states and two territories. Each state and territory in Australia has its own government tourism agency that works with regional tourism boards and associations and often with tourism businesses directly. The role of the state tourism organisations (STOs) is to, support the development and marketing of sustainable tourism destinations and experiences within their state, to increase awareness and attract visitors.

Due to the diversity of the tourism products within the states and territories, they are then divided into further tourism regions for marketing purposes. These regions have their own tourism associations that works closely with the state tourism organisation to increase visitation to their region.

People entering into the tourism sector will find an excellent and supportive network of local, regional and state bodies providing training, resources and marketing collateral.