• Most successful and highly rated Brisbane city-fringe, heritage old “Queenslander” Bed & Breakfast business. Located within walking distance of the CBD, Brisbane River and all other City places of interest. Owners ready to retire. • Lease period available of 10.5 years (as at June 2017) Offered on a WIWO basis. Freehold also available by separate negotiation. • Outstanding reviews ( rated #2 B&B in Brisbane on Trip Advisor, award of Excellence 2014/15/16 & rated #1 on Trivago) • Easily run by 1 or 2 persons with regular holiday periods factored into yearly schedule providing a very enviable and independent lifestyle. • The property has 6 stylish and well-appointed guest rooms plus a Managers studio for on-site living. • All equipment, fittings and furnishings are of a high standard with nothing further to spend. • Well established international clientele with approximately 70:30 foreign/local guest ratio. • Occupancy rate: 70-75% with high $$$ room-rate average across all year trading. • The lease sale offered is on a WIWO basis with all stock, fittings, equipment, furniture, computer reservation platform, business-name, website, advance bookings (12-months ahead) as well as full training to ensure a smooth transition to a new operator. • Ideally suit active couple seeking a high-end worry-free lifestyle business dealing with 4 ½ star (mostly International) guests from all parts of the world. Benefit from growing occupancy, ability to operate longer periods, and then there is the Commonwealth Games in April 2018. • Please note that full financial details will only be made available to proven bona-fide enquirers at the time of a personal meeting and property inspection, in-depth financials will not be provided via phone or email

ABOUT THIS REGION Brisbane is the capital and most populous city in the Australian state of Queensland, and the third most populous city in Australia. Brisbane's metropolitan area has a population of 2.2 million. The Brisbane central business district stands on the original European settlement and is situated inside a bend of the Brisbane River, approximately 16 kilometres (10 miles) from its mouth at Moreton Bay. The metropolitan area extends in all directions along the floodplain of the Brisbane River valley between Moreton Bay and the Great Dividing Range. The metropolitan area sprawls across several of Australia's most populous local government areas, including the City of Brisbane, which is by far the most populous LGA in the nation. The demonym of Brisbane is Brisbanite. Brisbane is a modern and diverse subtropical metropolis offering visitors a stimulating city experience in a warm, friendly and relaxed environment. It is well serviced by city infrastructure, including cultural precincts of theatres, museums and international cuisine. The world class sporting venues, conference facilities, parklands and river walks create a vibrant metropolitan city serviced by a modern cruise ship terminal. Brisbane city is electric with energy with an extensive music and culture event calendar. Visitors can choose to relax in South Bank, home of the 1988 World Expo or enjoy the temperate year round climate and take to the streets in many of Brisbane’s street shopping precincts. Brisbane is the ideal location for exploring Queensland’s countryside of world historic towns, fertile farming valleys and rolling cattle planes. Tourism plays a major role in Brisbane's economy, being the third-most popular destination for international tourists after Sydney and Melbourne. Popular tourist and recreation areas in Brisbane include the South Bank Parklands, Roma Street Parkland, the City Botanic Gardens, Brisbane Forest Park and Portside Wharf. The Lone Pine Koala Sanctuary opened in 1927 and was the world's first koala sanctuary. The suburb of Mount Coot-tha is home to a popular state forest, and the Brisbane Botanic Gardens which houses the Sir Thomas Brisbane Planetarium and the "Tsuki-yama-chisen" Japanese Garden (formerly of the Japanese Government Pavilion of Brisbane's World Expo '88). Brisbane has over 27 km (16.8 mi) of bicycle pathways, mostly surrounding the Brisbane river and city centre, extending to the west of the city. The river itself was popular with bathers, and it permitted boating excursions to Moreton Bay when the main port was in the city reaches. Today fishing and boating are more common. Other popular recreation activities include the Story Bridge adventure climb and rock climbing at the Kangaroo Point cliffs. The nearby Australia Zoo, made famous by Steve Irwin, also encourages many tourists to visit Brisbane. Many visitors also visit Brisbane on the way to other close by locations such as the Gold Coast and Sunshine Coast. INDUSTRY RESOURCES Regional Tourism Website : Visit Brisbane Regional Tourism Website : Queensland Tourism Research and Statistics : Tourism and Events Queensland Local Councils : QLD Councils CREDITS Information Source : Wikipedia Information Source : Queensland Tourism Image Credit : South Bank : Tourism and Events Queensland : 2010 Matt Harvey Regional Map : Copyright 2014 GoPanda Communications GoPanda 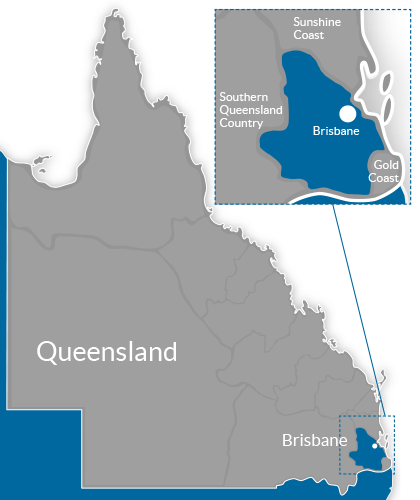 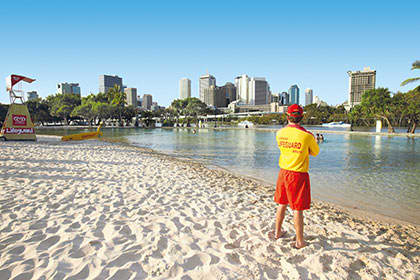