ABOUT THIS REGION Melbourne is the capital and most populous city in the state of Victoria, and the second most populous city in Australia. The name "Melbourne" refers to an urban agglomeration area (and census statistical division) spanning 9,900 km2 (3,857.2 sq mi) that comprises the greater metropolis – as well as being a common name for its metropolitan hub, the Melbourne City Centre. It is a leading financial centre in Australia, as well as the Asia-Pacific region, and has been ranked the world's most livable city since 2011 (and among the top three since 2002), according the Economist Intelligence Unit (EIU). In 2013 the EIU also ranked Melbourne the fourth most expensive city in the world, tying with Oslo, Norway. Melbourne is rated highly in the areas of education, entertainment, healthcare, research and development, tourism and sports. It is located on the large natural bay of Port Phillip, with its City Centre situated at the northernmost point of the bay – near to the estuary of the Yarra River. The metropolitan area extends south from the City Centre, along the eastern and western shorelines of Port Phillip, and expands into the hinterlands – toward the Dandenong and Macedon mountain ranges, Mornington Peninsula and Yarra Valley. The City Centre is located in the municipality known as the City of Melbourne, and the metropolis consists of a further 30 municipalities. Melbourne has a population of 4.25 million, and the fastest growing population among Australian capital cities. Inhabitants of the city are called Melburnians. Founded on 30 August 1835 (in what was then the Colony of New South Wales), by settlers from Launceston in Van Diemen's Land, it was incorporated as a Crown settlement in 1837. It was named "Melbourne" by the Governor of New South Wales, Sir Richard Bourke, in honour of the British Prime Minister of the day, William Lamb, 2nd Viscount Melbourne. It was declared a city by Queen Victoria in 1847, before becoming the capital city of the newly created Colony of Victoria in 1851. During the Victorian gold rush of the 1850s, it was transformed into one of the world's largest and wealthiest cities. After the federation of Australia in 1901, Melbourne served as the interim seat of government for the newly created nation of Australia until 1927. An international centre for performing and visual arts, Melbourne is often referred to as Australia's cultural capital. It is the birthplace of Australian dance styles; the Melbourne Shuffle and New Vogue, the Australian film industry (including the world's first feature film), Australian impressionist art (known as the Heidelberg School), Australian rules football, and the Australian television industry. In more recent years, it has been recognised as a UNESCO City of Literature and a major centre for street art. It is home to many of Australia's largest and oldest cultural institutions such as the Australian Centre for the Moving Image, the Melbourne Cricket Ground, Melbourne Museum, Melbourne Zoo, the National Gallery of Victoria and the UNESCO World Heritage-listed Royal Exhibition Building. The main passenger airport serving the metropolis is Melbourne Airport, which is the second busiest in Australia, and the Port of Melbourne is Australia's busiest seaport for containerised and general cargo. The main metropolitan train terminus is Flinders Street Station, and the main regional train and coach terminus is Southern Cross Station. Melbourne is also home to the world's largest tram network. INDUSTRY RESOURCES Regional Tourism Website : Visit Melbourne Regional Tourism Website : Visit Victoria Research and Statistics : Tourism Victoria Corporate Website Local Council : City of Melbourne CREDITS Information Source : Wikipedia Image Credit : Cruise boat sails on the Yarra River in Southbank : Tourism Victoria : 2008 Mark Chew Regional Map : Copyright 2014 GoPanda Communications GoPanda 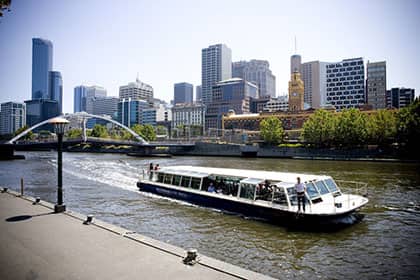