Here is an opportunity that does not come around very often. This substantial property is well located in the heart of Loxton’s Primary Production area. Currently offering a selection of crops it will make the perfect property for an enthusiastic buyer who is looking to live a chemical free life style. Certified organic- the returns are high. Current set up with irrigation and fencing you can be sure to instantly reap the rewards. FEATURES INCLUDE: LOCATION- Located with-in short drive the Loxton CBD. Dual access into the property from alter bitumen roads SHEDDING- A large commercial style shed with concrete flooring and power LAND SIZE- 13.61 ha/ 33.63 acres approx. FACILITIES- Mains Power, CIT water connection CROPS- Encompassing a selection of established crops including oranges, apricots, almonds, and table vegetables Please contact Kyle Hand on 0439 685 369 to organise an inspection of this of this substantial property.

ABOUT THIS REGION From its source in the Snowy Mountains in New South Wales, the Murray flows 2520 kilometres to the Southern Ocean in South Australia - through the Riverland, down to Murray Bridge and onto the Lakes and Coorong. The Riverland covers the area near the Murray River from where it flows into South Australia downstream to Blanchetown. The major town centres are Renmark, Berri, Loxton, Waikerie, Barmera and Monash. Each of these are accompanied by minor townships, the total area comprising approximately 30,000 people. Many of the towns were established for the re-settlement of soldiers after their return from World War I or World War II. Most towns were established as separate irrigation districts. While the Riverland is famous for its citrus, native foods, wines and wildlife, it’s also home to the national rose collection and largest rose garden in Australia - Ruston’s Rose Garden and Visitor Centre. Surrounded by more than 4000 rose varieties planted in 26 acres of rose gardens, there is no venue like it in Australia. Motoring enthusiasts will also enjoy the vintage car collection. Taken from the Aboriginal word ‘bery bery’, meaning ‘bend in the river’, Berri is the commercial hub of the Riverland, with extensive shopping outlets and lots of attractions worth visiting. Pick up your fresh produce from stalls on the outskirts of town, the Berri Visitor Information Centre or the weekly Riverland Farmers’ Market. From Berri, it’s a short trip to Winkie, which is home to the delightful Bella Lavender Estate and putt putt golf course. Barmera, with its ideal location on the shores of Lake Bonney, is one of the state’s most popular aquatic playgrounds. It's very popular with yachting enthusiasts, waterskiers, windsurfers and kite-surfers. It's also a safe swimming area for the family. At Kingston-on-Murray is the Banrock Station Wine & Wetland Centre - an award-winning wine and ecotourism destination. Take a walk through the restored environment on a self-guided interpretive walking trails, do a spot of birdwatching and stay for lunch. Bird life is also abundant in the lagoons and wetlands that edge the river in Waikerie, which was established in 1894 when its first settlers arrived by paddle-steamer. Here, you’ll find one of the longest stretches of accessible riverbank and the width of the river makes it popular for water sports, fishing and excellent for houseboats. It's also become the centre of the citrus and fruit industry in South Australia. Hundreds of hectares of grape vines planted in recent times has made Waikerie one of the largest tonnage producers in the Riverland. The town is also proud of its 18 hole, bunker-less golf course. A quite river town is Blanchetown and a popular spot for watersport enthusiasts is Morgan, which was the busiest inland port throughout South Australia in the 19th century. Nature lovers will love Cadell, which regularly attracts ornithologists to its bird hides and international botanists to the unique varieties of Prickly Bottlebrush. INDUSTRY RESOURCES Regional Tourism Website : Destination Riverand Regional Tourism Website : South Australia Research and Statistics : South Australian Tourism Commission Local Councils : Local Government Association of SA CREDITS Information Source : Wikipedia Information Source : South Australia Image Credit : Vineyards, Riverland : SATC : Neale Winter Regional Map : Copyright 2014 GoPanda Communications GoPanda 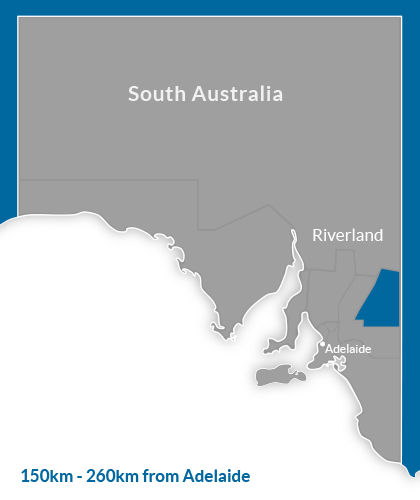 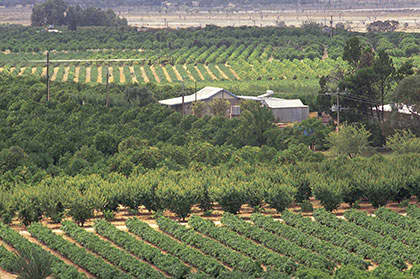